With Valentine’s Day just around the corner, here’s a verse from an Esther Howland creation (ca. 1850-1870):

Anticipation.
How oft my bright and radiant eyes
O’erflow with love – and so do thine
How bright the morrow’s sun would rise
Would’st thou, love, be my Valentine. 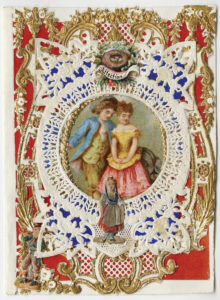 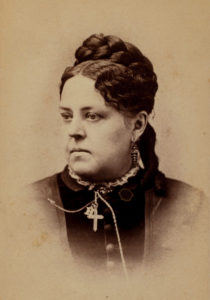 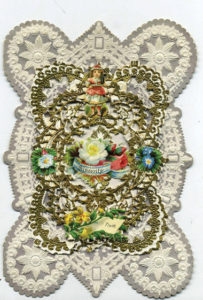 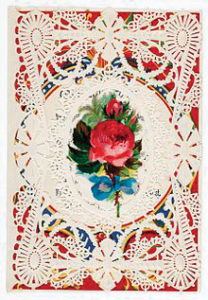 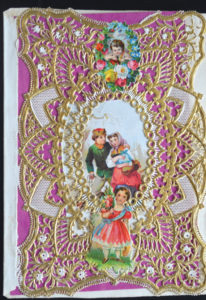 In the annals of 19th century history, many New England-women are lauded for their significant accomplishments as advocates for social reform (Susan B. Anthony, Harriet B. Stowe) or for their humanitarian efforts (Clara Barton).  Their names quickly come to mind and are immediately associated with their contributions.  But how many of us remember or recognize the name “Esther Howland?”  Greeting card and ephemera collectors honor and celebrate her accomplishments as the creator of romantic Valentine cards beloved by Americans.  Esther is referred to as the “Mother of the American Valentine.”

Esther Howland was an industrious woman entrepreneur born in Worcester, Massachusetts in 1828 to Southworth and Esther Howland. Her aristocratic family operated a stationery store and bookbindery.  Like another would-be famous woman of her time, poet Emily Dickinson, she attended Mt. Holyoke Female Seminary in South Hadley, Massachusetts.

At the time she was growing up, elegant Valentine cards with detailed, feminine designs were imported from Europe. Some American artists and manufacturers of the 1830s offered comic valentines.  Many card-givers who could not afford English or German greeting cards simply crafted hand-made cards at home.  As the story goes, Victorian-style imported cards were sold through Southworth Howland’s stationery business.  Their beauty inspired Esther and motivated her to begin design and production of sentimental, romantic greeting cards.

Through her father’s business connections, she purchased lace and colored paper stock from England while New York lithographers provided the pictorial art.  To test the market for her designs, Esther assembled ornate samples and sent them along to her father’s customers via her salesman-brother Allen.  The overwhelmingly positive reception created a substantive order backlog which allowed her to launch a commercial greeting card business.

From 1849 to 1874, she operated her card-making business from her home and employed numerous local ladies to clip lace, stencil, die cut and trim hearts.  Each lady was given a specialized task, completed it, and then passed the card to the next worker in an assembly-line fashion.

Esther was an innovator who could visualize an effect and translate it into a finished work of art.  For example, she added an underlay of color behind the paper lace and originated dimension techniques such as foldouts, hidden doors, and paper springs to enable layers to rise.  Remember the Valentines from your childhood with those fascinating moving parts?  Yes, we have Esther to thank for introducing movement effects way-back in the 1800s!  Esther maintained rigid quality control over her products. It’s said that she personally inspected every Valentine card produced in her workroom.  Details mattered. Over time, she incorporated embroidered silk, satin, ribbons and added gilt trim to further embellish her creations.

Ms. Howland possessed another essential skill for a successful greeting card business: an ability to express sentiment.  Her cards did not typically have a catchy slogan or greeting on the front cover.  A verse was pasted or printed within the card’s interior.  Esther recognized that customers may not like the verse as provided. To meet their needs, she published the New England Valentine Co.’s Valentine Verse Book in 1879. The booklet contained 131 red, green and blue verses in 3 different designs with which users could replace unsuitable ones.

When acquiring an antique “Howland” card, look for a red “H” on the card’s reverse or the embossed letters “N.E.V. Co.” (New England Valentine Company).  Cards with a similar look were made by competitor George Whitney who marked his creations with a red “W.”  Thousands of cards for Valentine’s Day and other holidays were produced by Esther Howland’s company. To source these today, seek out antiquarian ephemera dealers, auction houses and private collectors.  Collector’s note:  In the 1850s, Howland cards sold for 5 cents; highly embellished cards could even reach one dollar.

By many measures, Esther had achieved tremendous success through her business acumen, entrepreneurial spirit and a work ethic that could not be denied. Her company was incorporated in the early 1870s and reportedly surpassed $100,000 in annual revenues.  Her greeting cards were in demand and shipped from coast to coast. She was a respected employer and business owner.  Esther never married and dutifully sold her business in 1880 to care for her ailing father. She passed away in 1904, leaving a legacy of rich sentiments, beautiful intricately-designed greeting cards, and an influence on Valentine’s Day and the greeting card industry that would endure for decades.
Article by Gayle Manley