For stamp and toy collectors, pop culture followers and children who grew up watching Mister Rogers, March 23rd, 2018 will be “a beautiful day in the neighborhood.”  Ever humble with simple messaging, Fred McFeely Rogers will be honored by the U.S. Postal Service with the release of a commemorative 50 cents Forever® Stamp.  An image of the beloved Mister Rogers (1928-2003) will be accompanied by one of his famous puppet characters, the most royal “King Friday XIII.”

On February 19th, 1968, Fred Rogers aired the first episode of his television show Mister Rogers’ Neighborhood.  His shows always opened with the original song “Won’t You Be My Neighbor?” that Fred composed. Rogers presided as the show’s host dressed in what would become his trademark for more than 30 years – a cardigan sweater.  Fred’s mother hand-sewed every sweater he wore on the show.  A blue cardigan sweater once owned by Rogers was recently offered on eBay at an asking price of $16,700.  A red signature cardigan sweater from the 1970s resides at the Smithsonian Museum. 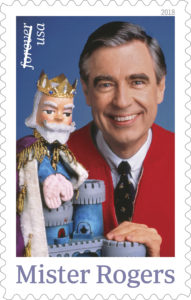 The U.S. Postmaster General and other participants will hold the first-day-of-issue stamp ceremony in the Fred Rogers Studio at Pittsburgh, PA’s WQED, the TV station in which Rogers’ TV shows were produced.  The Postal Service announcement notes that Rogers “inspired and educated young viewers with warmth, sensitivity and honesty.”  Rogers had an awkwardness in his childhood which observers say may have developed his empathetic nature and yearning for children to be accepted as they were.  He was an ordained Presbyterian Minister who ultimately became a popular television personality.

Just as Fred Rogers’ body of work would resonate with children today, it was a much needed positive influence during its time.  Robert Thompson, Trustee Professor and Founder of the Bleier Center for Television & Popular Culture (Syracuse University), offered his insights.  “We needed a little Fred Rogers in the world when he was doing it.  Within six months of the 1968 television debut of Mister Rogers’ Neighborhood, the U.S. was engaged in the Vietnam War and two prominent leaders, Martin Luther King and Senator Robert Kennedy, had been assassinated.  Shortly after the Show’s run of new episodes ended in 2001, the 9/11 terrorist attacks occurred.”   Mr. Thompson reflected that “Fred’s attitude, gentleness and message of kindness were extraordinarily important to young kids growing up and trying to cope in such complex times.”

This year marks the 50th anniversary of Mister Rogers’ Neighborhood of Make-Believe and its characters. Many Public Broadcasting Stations will air special showings as will the Fred Rogers Center in his hometown of Latrobe, PA.   As a long-time follower and expert of Pop Culture, Professor Thompson felt that Mister Rogers’ Neighborhood was truly timeless.  Thompson said that “Mister Rogers” TV production may well have been the most authentic and perfectly executed show for preschoolers.”

Plans are evolving for a movie by Tristar Pictures featuring Tom Hanks as Rogers, a toy line by Funko, and other public tribute events.  Collectors take early notice. Expect a surge in requests for Mister Rogers print and recorded media, toys, hand-puppets, first day covers etc. as nostalgia takes hold.  The good-guy, Fred Rogers aka Mister Rogers, is getting his due for decades of service to the public beyond his already prestigious industry awards.  It’s truly “a beautiful day in the neighborhood.”